Ánanda Márga (Sanskrit: आनन्द मार्ग ānanda mārga "The Path of Bliss", also spelled Anand Marg and Ananda Marg) or officially Ánanda Márga Pracáraka Saḿgha (organisation for the propagation of the path of bliss) is a socio-spiritual organisation and movement founded in Jamalpur, Bihar, India in 1955 by Prabhat Ranjan Sarkar. It is also the name of the philosophy and life-style propounded by Sarkar, described as a practical philosophy for personal development, social service and the all-around transformation of the society.

During Sarkar's incarceration in the 1970s the organization became associated with terrorist activity, particularly the Sydney Hilton bombing. In 1982, seventeen members of the organization were murdered in broad daylight at Bijon Setu. In 1995, a wayward arms shipment was claimed to have been intended for delivery to the Ananda Nagar community in Purulia founded by Ananda Marga. 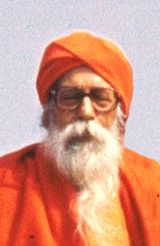 Prabhat Ranjan Sarkar founded the Ananda Marga Pracharaka Samgha (more commonly known as "Ananda Marga" or, less frequently, "Ananda Marg" or "Anand Marg") on January 5, 1955. The literal translation into English is "the Organization to Propagate the Path of Bliss." The stated aims of the organization remains are "liberation of self and service to humanity".[1] In March of the same year, the first group of acharyas was created in Jamalpur.

In a 1989 article in Hinduism Today, then Ananda Marga public relations officer Clark Forden describes three major controversies from the early history of the group: the arrest and incarceration of Sarkar in 1971, the 1971 sex scandal that resulted in the departure of Sarkar's wife from the organization, and the murder in broad daylight of seventeen Ananda Margis in 1982.[2]

During the 1960s, the organisation expanded rapidly in India sending acaryas as missionaries to other continents. Ananda Marga's popularity in India put it in direct confrontation with the Communist Party in West Bengal. In 1967, Ananda Marga headquarters came under attack by locals who were allegedly incited by Communist leaders.[3] Criticism of corruption in Indian government by acaryas of Ananda Marga also put it in confrontation with Prime Minister Indira Gandhi. On 29 December 1971, Sarkar was arrested along with several acaryas for abetting murder of six former disciples.[3][4] Sarkar was allegedly poisoned while in government custody at Bankipur Central Jail.[3][5]

Ananda Margis undertook terrorist acts for the purpose of freeing Sarkar.[6] In January 1975, Ananda Margis allegedly killed Indian Railway Minister L.N.Mishra[7][8] and in March 1975, attempted to kill Chief Justice of India.[9] On 26 June 1975, Prime Minister Indira Gandhi declared emergency and banned Ananda Marga along with several other organisations. Fearing for Sarkar's life, many Margis immolated themselves to draw attention to their guru's case. Some outraged non–Indian Margis formed a splinter group of PROUT, United PROUTists Revolutionary federation (URPF). URPF accepted responsibility for acts of international terrorism against Indian interests.[10] On 13 February 1978 members of Ananda Marga were alleged to have been involved on the bombing of the Sydney Hilton hotel during the Commonwealth Heads of Government Regional Meeting in Australia.[note 1] In 1990, an Ananda Margi, Evan Pederick admitted to having planted the Hilton Hotel bomb.[10][11] In 1978, Patna High Court acquitted Sarkar of all charges,[12] after which Ananda Margis ceased terrorist activities.[11]

P.R. Sarkar died on 21 October 1990. Acarya Shraddhananda Avadhuta was elected from the body of purodhas as President of Ananda Marga Pracharaka Samgha global organization and Purodha Pramukha.[note 2] In 1996, the Supreme Court of India lifted the ban on government employees from being members of Ananda Marga.[citation needed]

Tantra yoga, as interpreted by Shrii Shrii Anandamurti, is the practical philosophy which serves as foundation of Ananda Marga. According to P.R. Sarkar's teachings Tantra means liberation from darkness, the root tan meaning darkness, and tra liberation.

Meditation is the main spiritual practice of this tantric tradition, and through it the practitioner struggles to overcome weaknesses and imperfections. The basis of Ananda Marga practice is covered by a set of rules called the 'Sixteen Points' that guide the practitioner on both spiritual and social aspects.

Anandamurti expounded these principles in Ānanda Sūtram a text composed in Sanskrit in 1961.

In the tantric tradition of Ananda Marga the spiritual aspirant (sadhaka) practices sadhana. Sadhana (a Sanskrit word) signifies the effort through which a person becomes completely realized. In Tantra the spiritual master, the guru,[note 3] plays a special role. The guru guides and leads students on the spiritual path. The aspirant learns meditation by a qualified acarya. An acarya is most commonly a monk or nun, but in the Ananda Marga tradition there are also "family acaryas". In the initiation the aspirant makes a commitment to practice meditation and to live in harmony with the universal balance, and is then taught the technique itself. The aspirant is then required to keep the individual lessons personal. In addition, he also taught Kapalika meditation to many sanyásins. His system of yoga can be termed as Rájadhirája Yoga, Tantra Yoga, or simply Ánanda Márga Yoga. The basic Ánanda Márga meditation system is called Sahaja Yoga ('simple yoga'). The sahaja system consists of 6 meditation techniques or lessons taught one by one, on a personal basis.[note 4] There is also a set of higher meditation lessons taught to advanced practitioners committed to dedicate more time for spiritual practices and universal service.

According to the Ananda Marga system the Lalita Marmika dance is performed, particularly during the collective meditation.[note 5] This yogic dance with swaying movements, combined with a kirtan (the chanting of the universal mantra), is regarded as useful in freeing the mind and preparing it for meditation. Ananda Marga system recommends to its members the practice of collective meditation at least once a week. These meetings called Dharma Chakras (weekly held in a place called Dhyan Mandir) are preceded by the singing of few Prabhat Samgiita ("Songs of the New Dawn" composed by the Ananda Marga founder) followed by the spiritual dance of Lalita Marmika along with the singing of

[[:Media:|kiirtan]] (help·[[:File:|info]]) and by the practice of meditation. Before meditation the

Samgacchadvam (help·info) mantra is chanted. At the end of meditation the

Nityam Shuddham (help·info) and the

Tandava dance. One of the 108 Tandava poses of Nataraja (dancing Shiva).

The philosophy of Ananda Marga is a synthetic outlook, recognizing a 'Supreme Consciousness',[15] which is claimed to be both transcendental and manifested in all.[note 13] It covers both the spiritual and the social combining the two in a unique synthesis of universal vision.[note 14] To this end Ananda Marga suggests a practical, rational, and systematic way of life for the balanced development of all human potentialities: physical, psychic and spiritual. This system incorporate practices that range from hygiene and diet, yoga postures, to a scientific technique of meditation based on moral rules and directed to the inner fulfillment. It recognizes that a balance is needed between the spiritual and mundane aspects of existence, and that neither one should be neglected at the expense of the other. Hence, the goal of Ananda Marga is "self-realization and the welfare of all". 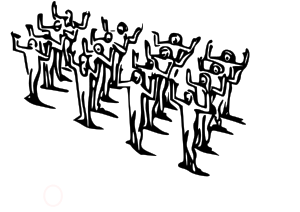 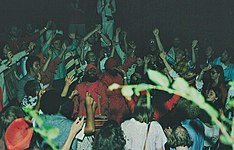 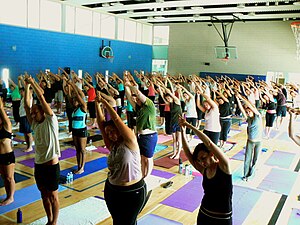 The spiritual philosophy of Ananda Marga covers a vast range of topics and can be learned from P.R. Sarkar's publications. Ananda Marga philosophy recognizes that the universe is the creation of the mental thought-waves of the 'Supreme counsciousness'. The following is a brief list of the essential elements of Ananda Marga Spiritual Philosophy:

The social outlook of Ananda Marga recognizes that the welfare of the individual is linked with the welfare of the collective, each relying on the other for its existence and dynamism. According to this philosophy everyone has the right to equal opportunities of life and development and as such there should be no discrimination on the basis of superficial barriers such as race, nationality and religion. Ananda Marga advocates a world of justice, security and peace for all.[18] The Social Philosophy of Ananda Marga can be categorized under the topics:

...If the term “culture” is usually referred to the original meaning of this word (i.e. from the Greek "paidéia" to the Latin "humanitas", that is to human beings capable of distinguishably mastering the arts, rhetoric, and philosophy), then Sarkar offers a new point of view, with a large universalistic explanation: “the culture of the whole human race is one, but marked by different local manifestations... it is the same, but varying in expression." (Sarkar, P.R., 1987)...[21]

""A person who, irrespective of caste, creed or religion, aspires for spiritual expansion or does something concrete, is a Tantric. Tantra' in itself is neither a religion nor an 'ism'. Tantra is a fundamental spiritual science. So wherever there is any spiritual practice it should be taken for granted that it stands on the Tantric cult. Where there is no spiritual practice, where people pray to God for the fulfilment of narrow worldly desires, where people’s only slogan is “Give us this and give us that” – only there do we find that Tantra is discouraged. So only those who do not understand Tantra, or even after understanding Tantra do not want to do any spiritual practice, oppose the cult of Tantra."

Sarkar weaves continuity with the ancient philosophy of Tantra, infusing new insights in human psychology, social theory and in each individuals' roles as spiritual and "socio-economic-cultural-political" beings. Ánanda Márga Tantra has a broad metaphysical base which allows for ways of knowing, feeling and processing which go far beyond intelectuality or limited rationality. Priorities are given to the spiritual development, as Shrii Shrii Ánandamúrti notes, "spiritual life controls all other arenas of human life."[26] Ananda Marga Tantra is a principle, a science which if practiced will lead to the desired objective. The essence of Tantra is to awaken the latent spiritual force in the human personality and unify oneself with the Cosmic Consciousness.[note 24]

According to tantric tradition a proper preceptor and a proper disciple are both essential for success on the path of Tantra. P.R. Sarkar clearly explains[27] that, disciples are of three categories: 1) disciples that acquire spiritual knowledge when they are in close contact with the preceptor, but as soon as they are apart from him they forget all his/her teachings, 2) disciples that learn many things from the preceptor with great hardship, but do not take proper care to preserve those instructions. They lose their hard-earned knowledge out of negligence, 3)disciples that carefully preserves deep in their minds and hearts whatever they have learned from their preceptor by wisely putting those teachings into practice. This is the best category of disciples.