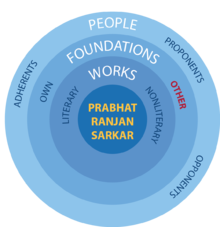 Sarkarverse was officially launched on 2013 October 21 by Ac. Abhidevananda Avadhuta. In early 2013, Abhidevananda and a few other editors were working on Prabhat Ranjan Sarkar related articles in Wikipedia. There, their series of articles were repeatedly challenged. Even a small article on Sarkar's collection of 5,018 songs, Prabhat Samgiita, required over two weeks (17 days) of heated debate just to pass Wikipedia's capitalistic concept of notability. In the end, most of the Sarkar-related articles were deleted, merged, or reduced to trivial and largely misleading content. After this experience, Abhidevananda withdrew from Wikipedia, storing the Sarkar-related articles from Wikipedia on the website onlyhis.name. In the preface to the early project on that website, Abhidevananda wrote:[2]

As is well-known, Wikipedia suffers from a considerable amount of systemic bias. Furthermore, many senior editors openly acknowledge that Wikipedia does not "do truth". An over-reliance on secondary sources often results in articles that are nothing but book reviews of book reviews.

Abhidevananda wanted to create a Wikipedia-like encyclopedia for Prabhat Ranjan Sarkar and his various works. In early October 2013, Sarkarverse was planned, and work on the project began. The project was made possible only with tremendous, voluntary assistance, primarily from Tito Dutta in India and Bryan G. White in the USA. Fred Bauder (USA) also provided considerable help. All three men are veterans of Wikipedia with technical expertise vital to Sarkarverse.

On 2013 October 27, Sarkarverse faced a serious spam attack. More than 100 new accounts were created to post inappropriate articles with external links. All 100+ accounts were quickly blocked, and new account creation in Sarkarverse was temporarily disabled. Account creation was re-enabled on October 28 after imposing various spam counter-measures. However, within days the spam accounts were cropping up again, less in number but still a nuisance. On November 2, a long-term decision was taken to disable new account creation except by direct request. This was deemed to be the most efficient means of preventing spam with minimal inconvenience for well-intentioned editors, both old and new.

The mission of Sarkarverse is to present accurate and verifiable information about all of the many direct and indirect works of Prabhat Ranjan Sarkar.

Sarkarverse is a collaborative endeavor. It uses MediaWiki software and a Wiki environment.

Sarkarverse is one of the two educational wings of AmRevolution, Inc., a 501(c)(3) non-profit organization in the United States, registered with Charity ID: 45-4824461.