Ahimsa (Sanskrit: अहिंसा; Roman Saḿskrta: ahiḿsá; IAST: ahiṃsā, Pali:[1] avihiḿsá) is a term meaning benignity, non-injury. The word is derived from the Sanskrit root hiḿs – to strike. Hiḿsá is injury or harm. A-hiḿsá is the opposite.[2][3] 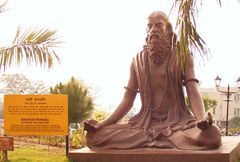 Ahimsa is one of the cardinal virtues[4], the first of ten principles in the ancient tantric/yogic system of morality, Yama-Niyama. As such, it is also an important tenet of major Indian religions (Buddhism, Hinduism, and Jainism). Over the years, Ahimsa has been interpreted in many different ways. In his book, A Guide to Human Conduct, Sarkar analyzes the concept of Ahimsa and some popular interpretations of the term.[5]

The word Ahimsa - sometimes spelled as Ahinsa[6][7] - is derived from the Sanskrit root hiṃs – to strike; hiṃsā (or hiḿsá in Sarkar's Roman Sanskrit) is injury or harm, a-hiṃsā is the opposite of this, that is benignity or non-jury.[6][8] According to Sarkar, "Ahiḿsá means not inflicting pain or hurt on anybody by thought, word or action."[5]

The concept of ahimsa first arose as an ethical precept in the indigenous tantric tradition of ancient India. Over time, the concept of ahimsa made its way into Vedic texts with varying interpretations. When the philosopher Patanjali (circa 200-400BCE) systematized tantra into what is popularly known as Aśt́áuṋga Yoga (eight-limbed yoga) or Rája Yoga (the king of yogas), ahimsa was the first principle of his first element of yoga, Yama.[11] 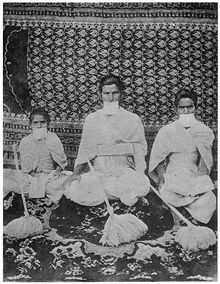 Some Jain monks wear a mask over their mouth

In both Jainism and Buddhism, both circa 500BCE, ahimsa is a key ethical principle. In Jainism, it is the first and main ethical principle. Jain renunciates reject the use of force even when it is required for self-defense. They are often seen wearing a mask over their mouth to avoid the unintentional ingestion of flies. And they have also been known to pour sugar into anthills.[5] Buddhists observe a somewhat less strict interpretation of ahimsa. For example, unlike Jains, not all Buddhists are vegetarian.

In modern times, the concept of ahimsa has taken on a new meaning, in large part due to the teachings and activities of Mohandas Gandhi. According to Gandhi, ahimsa means non-violence. This is perhaps the most extreme interpretation of ahimsa, given the fact that even Jains and Hindus accept the use of violence in self-defense.[12][13]

According to Sarkar, principles of morality must take into account both action and intent. When there is an unavoidable conflict between the two, intent becomes primary. So Sarkar notes with respect to ahimsa that violence (or the use of force) is both natural and unavoidable. Hence, ahimsa cannot be reasonably interpreted to mean the non-use of force.[5]

Life feeds on life. So, for example, our choice is to drink purified or unpurified water. In both instances, we end up killing microbes, either outside or inside our body. Hence, with respect to food, Sarkar endorsed a gradation rule, similar to that of the Jains, whereby food is selected with an effort to maintain a healthy body and mind by taking sustenance from entities with the least self-awareness. When it is possible to remain healthy by subsisting on grains, vegetables, fruits, dairy products, nuts and the like, then there is no justification for killing animals or even fish to eat their flesh.[5]

According to Sarkar, morality does not suppress the natural instinct for survival. So, with respect to self-defense, Sarkar argues that combat against an aggressor (átatáyii in Samskrta) is not just acceptable but even noble. Sarkar notes that Krsna encouraged the Pandavas to do battle with the Kaoravas, because they were aggressors.[5]