Táńd́ava (Devanagari: ताण्डव) or Tandava dance (Devanagari: ताण्डव नृत्य) is a vigorous dance for male spiritual aspirants that was invented by Shiva.[1] The name of the dance is derived from the Samskrta word, tańd́u, which means "jumping".[2] In tandava, jumping is the main feature. Symbolically, the dance represents a fight against death and decay, the struggle of good to overcome evil.[3] "When Shiva Himself does this dance (Shiva Nát́arája), the dance becomes a metaphor in which Supreme Consciousness sends vibrations throughout the universe and causes all objects of the universe in turn to radiate vibrations."[4] 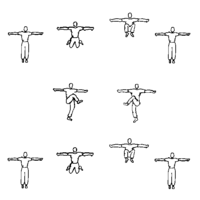 Tandava is practiced with the feet moving strictly in accordance with a beat. After the initial jump and before the final jump, the practitioner rapidly moves to a position in which only the balls of the feet touch the ground, and most of the dance time is spent off the ground. When practiced formally, the dancer holds a symbol of life or struggle in the right hand (for example, a dagger or a tiny drum) and a symbol of death in the left hand (for example, a skull or a snake).

According to Anandamurti, the practice of tandava is unsuitable for females due to the strain it puts in the area of the reproductive organs. To overcome this problem for women, Anandamurti invented the kaośikii dance.[6]

Performance of tandava in Ananda Marga

All male spiritual aspirants who are physically capable of doing so are encouraged to practice tandava. On the occasions of Dharma Mahásammelana (and, also formerly, Dharma Mahácakra), the performance of tandava was made compulsory by Anandamurti. Furthermore, on those occasions a public procession with tandava dance was also compulsory.[7]

Other commentators on the subject 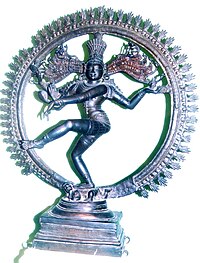 According to Ananda Coomaraswamy, tandava is a pictorial allegory of what he deems to be the five principal manifestations of eternal energy:[8]