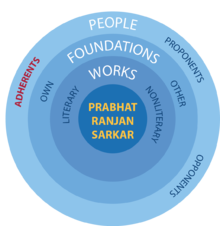 Pranakrsnananda Avadhuta[1] is a yogic monk of Ananda Marga Pracaraka Samgha since 1971 and a social activist in New York City, where he also teaches Raja Yoga or Astaunga yoga meditation.[2] While participating in the Occupy Wall Street protests, he became one of the first to be arrested on Brooklyn Bridge on October 1, 2011.[3]

Pranakrsnanada was personally initiated by Prabhat Ranjan Sarkar aka Shrii Shrii Anandamurti into the order of avadhuta, a monk or nun of an order close to the tradition of Shaeva Tantra.

Dada Pranakrsnananda warned that the focus of the OWS protests could shift to the conflict between the movement and the police, when it should remain on the injustice of corporate greed and inequity of wealth in society.[4][5]