The five fundamental principles of PROUT are the practical essence of the socioeconomic theory given by Prabhat Ranjan Sarkar. Application of the Progressive Utilization Theory relies on an understanding of the underlying concepts of these principles, the interrelationship of the principles, and their respective areas of application.

The five fundamental principles of PROUT are:[1] 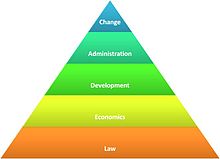 The social pyramid. Click here to enlarge the image. Click a layer to read more on the topic.

Law maintains social integrity. Without it, society, to the extent that it survives, is reduced to tyranny.[3] Without law, not just our social existence but also our social identity is in jeopardy.[4] And fundamental to law is the notion of property rights. This applies regardless of whether a society is capitalist[5] or communist.[6] 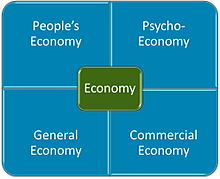 Quadridimensional economics of PROUT. (Click a dimension to read more on the topic.)

The second fundamental principle of PROUT reduces economics to its two rudimental elements: production and distribution. To optimize production, PROUT prescribes maximum utilization of all resources, animate and inanimate. To optimize distribution, PROUT prescribes a rational approach (in contrast to Adam Smith's invisible hand[7] and Karl Marx's according to contribution or according to need[8]). To implement such an economy, PROUT analyzes economics in respect to four dimensions: people's economy, psycho-economy, commercial economy, and general economy. Regarding these four dimensions of economics, Sarkar states:

Most economists today understand only a little of the principles of general economy and something of commercial economy, but both of these parts are still in an undeveloped stage. People’s economy and psycho-economy are totally overlooked by modern economists, and as such could find no place in the present mode of economic thinking.[9]

PROUT notes a great distinction between material property and intellectual property. Unlike material property, intellectual property has a highly elastic quality. That is to say, possession of intellectual property does not inherently prevent anyone else from possessing the same property. In contrast, physical wealth has no such elasticity. Possession of material property automatically tends to restrict the access of everyone else to that property. If one person has a particular MP3 file on her/his computer, others could also have that same MP3 file on their computer; however, if one person has a loaf of bread in her/his kitchen, others could not have that same loaf of bread in their kitchen. Hence, PROUT seeks to divert human longings more toward psychic and spiritual wealth and less toward physical wealth. In the view of PROUT, this would help to ensure that no one's basic necessities are curtailed, and it would better satisfy everyone's thirst for freedom and progress.

The value of money increases with its mobility... The maxim, "Keep money rolling", is as true as the proverb, "Keep the wagons moving".[10]
Prabhat Ranjan Sarkar

Commercial economy is the application of scientific and efficient methods of production and distribution that do not incur loss but rather ensure that output exceeds input.[9] Under capitalism, this dimension of economics has been developed somewhat, but the primary goal in respect to production is profit rather than consumption (as in PROUT). So, for example, under capitalism, outsourcing of labor to a cheaper locality and the diversion of raw materials from an underdeveloped country are both acceptable, if not desirable, commercial economy. Under PROUT, neither would be acceptable.

Under PROUT, efficiency in respect to production and distribution is enhanced by judicious allocation of amenities. Another way in which efficiency would be enhanced is by restricting hiring in respect to floating populations.[11]

The banking system is a crucial element of commercial economy. Without banks, the mobility of money would be hindered. However, banks and similar institutions have a tendency to be greedy. Hence, they may make unsafe or unwise loans. When that occurs, depositors are at risk of losing their savings. (Some recent examples of this problem are the savings and loan crisis in the 1980s and 1990s, the subprime mortgage crisis in the 2000s, and, most recently, the Libor scandal of 2012.) PROUT insists that the banking system be carefully regulated. The establishment of local banking cooperatives can also help to reduce risks.[12]

With respect to monetary policy, a PROUT-based economy would prohibit the issuance of currency that does not have a proportionate amount of reserved bullion (typically, gold). This would eliminate the possibility of crippling inflation and facilitate a genuine and recognizable increase in purchasing power.[10]

In principle, PROUT supports free trade as a means of enhancing distribution and reducing price manipulation.[13]

The overall position of PROUT in respect to general economy is consistent with the objectives of economic decentralization and regional self-sufficiency.

PROUT extends the general concept of industry to include all aspects of the agricultural and service sectors as well, arguing that they too should be run in an efficient industrial fashion. Regarding the industrial structure, PROUT advocates a three-tiered approach:[14]

PROUT would organize nations and ultimately the entire world on the basis of self-sufficient economic zones, based purely on socioeconomic and geographical considerations rather than political considerations (as is currently common).[18] Within each socioeconomic zone, there would also be decentralized planning down to the block level, the block being the lowest level on which economic planning is feasible. In other words, economic planning would function on many levels – block, district, state, national, and global levels – but the block-level planning would be the primary level of planning. As block-level planning is essential for economic decentralization, it should be adopted in all blocks, and it should be constitutionally mandated.[19]

In keeping with its organic view of society, PROUT notes that civilizations come and go, live and die. For example, the ancient Egyptian civilization that constructed pyramids is gone. Though the country is the same, the society is different.[20]

According to PROUT, there are six factors on which the development of any society depends:[21]

With all decision making, multiple options are available. The fourth fundamental principle of PROUT calls for a well-balanced adjustment among the utilizations. Sarkar amplifies the concept of a well-balanced adjustment by affirming the need to maintain correspondence and concord among all the factors: crude, subtle, and causal as well as physical, mental, and spiritual. For example, society is obliged to furnish the minimum requirements of life to everyone. But if society were to carry out that obligation by building a house for every citizen and delivering food at each doorstep, then people would soon become lazy. So a more balanced approach would be for society to make provision so that everyone, in exchange for their labor according to capacity, will earn the money required to at least purchase their necessities. For similar reasons, to raise the minimum standard of living, the best approach would be to enhance everyone's purchasing power.[22] In later years, Sarkar formalized and extended this decision-making paradigm (sometimes referred to as the law of parallelism) by introducing the theory of pramá.

As a corollary to the law of parallelism, Sarkar asserted that two factors must be carefully weighed when taking decisions. Those two factors are subtlety and rarity. By applying those two factors to the question of what work society should take from an individual, PROUT arrives at the ideal candidates for the duty of top-level decision-making, government.

Every human being has physical, mental, and spiritual potential. That potential should be developed to the fullest extent in everyone. However, at any given time, all three capabilities may not yet be developed in some persons. For those with only a developed physical capacity, it is clear that society should utilize them primarily for their physical power. For those with both physical and mental capacity developed, society should utilize them more for their intellectual power and less for their physical power. The reason that Sarkar gives is that intellectual power is rarer and subtler than physical power. Sarkar argues that with such an approach, society derives more benefit from the service of those persons, and those persons in turn derive more satisfaction from their work. Insisting that a great scientist must also perform labor as a farmer is irrational, because that scientist could conceivably benefit society far more with just one hour's work in a laboratory than one thousand hours' work in the fields. If the concern is to ensure the scientist's physical health through exercise, that exercise may also be had in the form of any suitable and appealing sport or physical recreation.

Spiritual power is the rarest and subtlest ability. So, from those with all three capacities (physical, mental, and spiritual) developed, society should take greater spiritual service, less intellectual service, and still less physical service. According to Sarkar, such persons can render the greatest service to society. Those with only physical and mental power (warriors, intellectuals, and capitalists) render less service. Those with only physical power (unskilled laborers), though not unimportant, can only work under the direction of those endowed with spiritual or mental power. Hence, social control should not be vested in those that are only brawny nor even those that are also brave, brainy, or worldly wise. Rather social control should only be vested in those who possess all of those features plus the spiritual quality to work selflessly for the welfare of all – in a word, sadvipras.[22]

The fifth fundamental principle of PROUT observes that change is a constant in this universe. Three factors of relativity (time, space, and form) are constantly changing in relation to themselves and in relation to the other two factors.[23] So, according to PROUT, change is inevitable. What PROUT prescribes is not change but rather progress.

In 1959, an initial glimpse of these five principles appeared in Sarkar's work, Idea and Ideology.[25] The preliminary wording found there is:

Undoubtedly, Sarkar did say something on the subject of the five fundamental principles in 1959. But the language in which he spoke, the precise words that he said, and the quality of any translation that may have been done cannot be verified. What we have is only a few short paragraphs that were tacked on at the end of Idea and Ideology without any vetting and hence with doubtful authenticity. As the style and quality of language is greatly inferior to that found in the rest of the book, there is every reason to doubt the accuracy of what appears there. Furthermore, the concepts presented in the last paragraphs of the last chapter of Idea and Ideology do not correspond with the rest of that chapter, and the concluding sentences (introduced without amplification as fundamental factors on which the principles of PROUT depend) are riddled with internal problems and even inconsistencies. This is unlike most other published discourses or writings of Sarkar.

It is an undisputed fact that Ananda Sutram is the commanding authority on all of Sarkar's philosophy. This is stated clearly in Chapter 10: Svadhyaya of Ananda Marga Caryacarya Part 1.[26] And though it is well-known and accepted that the relevant Samskrta sutras in Ananda Sutram do not translate to the words that were tacked onto the end of Idea and Ideology, Ananda Sutram has never been published with an official English translation of those five aphorisms. As this is not rational, the only possible reason for that singular omission is a concession to the many authors who wrote articles and even books that employed the earlier English wording. Of course, this amounts to the imposition of dogma. But to this day, some older proutists argue feverishly and illogically in favor of that earlier wording.[27]